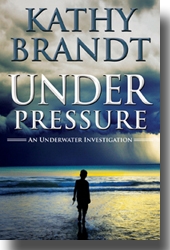 Under Pressure  Book 4 of the Hannah Sampson Underwater Investigation Series.

Underwater investigator Hannah Sampson is gearing up to dive on a flawless tropical morning, marred only by the reports of a distant storm brewing in the Atlantic, when the sea turns to carnage—an airplane plunges into the water just yards off the bow of her boat.  Minutes later, Hannah and her dive partner are sixty feet below the surface, vying with sharks to pull victims out of the wreckage.

A terrific writer.  The scene with the sharks inside the aircraft was enough to cause nightmares.  Well done!”  — Clive Cussler

You think being a detective on terra firma is tough?  Try doing it underwater—it’s all in a day’s work for spunky British Virgin Islands police diver Hannah Sampson….vivid descriptions of the mysterious world that bubbles beneath the deep blue sea.–The Strand Magazine

Buy the CSI Underwater Mystery Series from these booksellers: